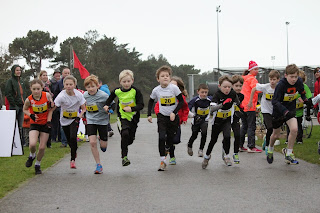 In the seven year old category Casper Whitewood got off to a strong start in the 500m run leading a group which consisted of race 1 winners Luke Holmes and Elizabeth Atkinson along with newcomer Daniel Stocke. Halfway round Holmes took over at the head of the race but Atkinson and Stocke held on with the gap between the three leaders and Whitewood only 5 seconds as they switched to the bike leg. Second girl Hannah Worth arrived at transition a further 12 seconds back. Holmes dominated on his strongest discipline, the 1.5km cycle, gaining almost a minute on most of his competitors leaving him with a comfortable final run to make it two wins from two. The racing was still going on further back with Whitewood and Worth both cutting the deficit to Atkinson on the bike and only 10 seconds covered these three as they entered transition for the final 500m foot race. Atkinson, winner of the Spartans Junior cross country less than 24 hours earlier, was able to make the break in the final 500m with Whitewood just doing enough to hold off Worth for third overall.

In the 10 and under age group top runners Luke Killian and Freddie Lucas set the pace over their 500m first run followed by one of the island’s leading cyclists Malo Monpetit Le Brun and leading girl Lily Scott. With a short first run the gaps behind were all very tight and there was all to play for as they made their way through transition. As expected Le Brun quickly took the lead over the 3km cycle and entered the final transition with a 20 second cushion to Killian in second with Lucas and a fast cycling Liam Cadoret not far behind. Killian set out on the final 800m run in no mood to lose his lead in the Jacksons series, overcoming Le Brun halfway around and going on to build himself a comfortable gap by the end. Cadoret also fought through with a strong to take 3rd ahead of Lucas but it was not enough to catch Le Brun who held on to second place with a 20 second margin. Scott meanwhile was having a battle with her own cousin, Dan Roderick, whose solid cycle had put him ahead but Scott made back the deficit and had the stronger sprint to finish in fourth overall and first girl, comfortably ahead of round 1 winner Ellie Boustouler.

The 11 & 12 year old race saw the return of Jack Kennedy who had been unable to take part in the first event of the series. Kennedy made a strong start on his favoured run leg setting a pace over the 1500m run which left Peter Holmes and Will Atkinson over 40 seconds in arrears at first transition with first girl, Adele Maher, a full minute behind the leader. Holmes almost halved the gap on his stronger discipline, the 4.5km cycle, but Kennedy was comfortably ahead and extended his lead further on the final 800m run to win in a time of 19:19 ahead of Holmes in 20:14. Maher had managed to get in front of Atkinson during the bike leg and despite his faster finish she managed to hold him off for third overall, also taking the victory in the girls’ event ahead of Aimee Hugh.

In the final age group Ollie Turner was looking to repeat his victory of the first event over Sam Maher. Maher had clearly decided that attacking early might be his best chance to turn the tables and over the first run he smashed his own course record by 19 seconds running 4:42 for the 1500m loop. Turner hung on as well as he could and his own 5:04 was only 3 seconds slower than the previous run course record with Joe Hugh coming through in 5:29 for third. Onto the bike course and as expected Turner took over the lead but Maher tried his best to keep with the rapid pace and managed to keep the deficit to just 7 seconds as the two set off on their final 800m run. Turning the tables on Turner Maher quickly closed the gap, going on to finish 15 seconds clear of Turner with Hugh coming home in third. After two races in the series Turner and Maher are level at the top of the Jacksons Duathlon Series standings. Race organisers thanked club and event sponsor Jacksons who continue to provide valuable support to the club. Parents and course marshals were also thanked for their help in making the event a success.

The next race in the series sees the athletes go off-road with a cross country run and mountain bike course at Mont Rossignol on 18th January. Jacksons race events are free to enter and open to all children from 7 upwards. For more details on the club, training and events see www.juniorjerseytri.com