Mont Rossignol 18/01/14
The most recent round of the Jacksons Junior Duathlon series was another first for the club as junior athletes raced off-road for the first time. A course consisting of two cross country running races separated by a mountain bike race was laid out in the mud at Mont Rossignol in St Ouen. Whilst race distances were shorter than usual the much more difficult terrain meant a much harder task for athletes.
First up were the seven and under athletes who tackled a 300m run loop before picking up their mountain bikes in transition and it was the usual suspects leading with Elizabeth Atkinson ahead of Luke Holmes and Hannah Worth. Onto the technical and slippery mountain bike course for two laps of around 400m and Holmes quickly established the lead from Worth with newcomer Thomas Nisbet coming up quickly behind. A crash by Holmes on the first lap however set him back and Nisbet took his opportunity to move through into the lead with the fastest cycle split of all. Holmes recovered but had a 25 second deficit to Nisbet and with just 300m running to go his fast final run was not enough. Nisbet took the victory in his first duathlon race with Holmes second. Third overall and first girl was Hannah Worth who moved past Atkinson on the bike. Another newcomer to duathlon, Emily Le Gros was third girl and was followed by third boy Casper Whitewood, the least experienced mountain biker in the group. 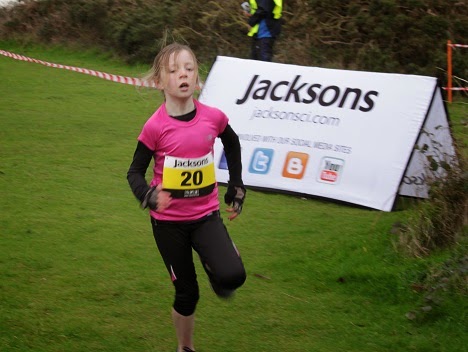 Next up the under 10 athletes took on two laps of the same run loop followed by four laps of a longer and even more technical mountain bike course and a final two lap run. Another newcomer (and older brother of under 7 winner Thomas) Sam Nisbet made the early running ahead of Dan Roderick and leading girl Lily Scott. The mountain bike course really spread out the field and placed the mountain biking specialists firmly in control. Nisbet led off the bike with Liam Cadoret and Charlie Hart cutting through the field with fantastic bike rides. Meanwhile another JCAYA mountain bike regular, Katie Le Gros quickly overcame the 20s lead of Scott and built herself a cushion of well over a minute as they reached the second transition. The final run saw the leading boys all recording similar run splits with positions unchanged at the end as Nisbet took victory over Cadoret and Hart. Scott had another strong run but was unable to make up the deficit to Le Gros who took victory at her first attempt ahead of Lily Scott with younger sister Eva Scott back in third.

The newcomers had taken three of four wins so far but in the 12 and under age group the leading duathletes are all experienced mountain bike racers and as expected it was the usual names making the running. Jack Kennedy went from the gun to lead the 1200m first run ahead of Peter Holmes and Will Atkinson who came into first transition together with Adele Maher close behind. With heavy rain having set in from the West the race organisers were forced to cut down the bike ride to the same 4 lap 1.8km course as the previous group. Kennedy continued to build his lead at the front whilst British Schools Cycling Association champion, Adele Maher, moved ahead of Holmes and Atkinson
behind. Kennedy’s lead was over a minute by the time he reached the second transition but he continued to push on recording the fastest final run to come home almost 2 minutes ahead of first girl Maher. Holmes build a small lead on Atkinson on the cycle and was able to keep ahead over the run course to take second with Atkinson third. Second girl was Harley Cadoret in her first duathlon with Aimee Lutz behind.

The oldest junior age group raced with the senior duathlon field later in the day. Ollie Turner retook the series lead with a great victory not only in the junior section but ahead of all senior athletes too. Joe Hugh ran strongly but was hampered by his decision not to change to cycling shoes in first transition, he nonetheless ran strongly against the senior field picking up valuable points for second place in the junior series.

Race organisers thanked Lyndon Farnham for permission to race on the land, Colin Hidrio for his support in organising the event and event sponsor Jacksons.
Jacksons race events are free to enter and open to all children from 7 upwards. For more details on the club, training and events see www.juniorjerseytri.com