The annual winter duathlon series, sponsored by Jacksons and organised by the junior section of Jersey Triathlon Club, got underway on Saturday in bright and calm conditions at Les Quennevais. A field of 25 junior athletes took part in four age groups with the 7 year olds racing first followed by the older age groups.

For the athletes aged 7 there was a new run course of 500m around the football pitches which was followed by a lap of the cycling track by bike and a repeat of the same run again to finish. Elizabeth Atkinson set the early pace followed by Luke Holmes with Olivia Boustouler some way further back. Through first transition it was neck and neck with Holmes and Atkinson but Holmes made a break on the bike course to build up a strong lead. Further back Hannah Worth had a slower start but quickly made up places with the fastest bike split of the day climbing from 5th to 3rd place overall. On the final run Holmes cruised to a fine victory with Atkinson just managing to hold off the fast approaching Worth to win the girls category with Worth in second and Olivia Boustouler in third. Casper Whitewood and Jamie Parslow, both competing in the duathlon series for the first time, took second and third places respectively in the boys’ event.

The next three age groups had different distances to cover but raced together after the end of the 7 years old race. Last years’ series champion Luke Killian stormed round the new 800m run course, 3km cycle and final 800m run with the fastest splits in all three to record a dominant victory for the 10 & under boys with Freddie Lucas pipping Thomas Atkinson to second place in race which was closely fought from start to finish. In the girls’ 10 & under category Ellie Boustouler had the upper hand on Lily Scott over the first run, Scott attacked the cycle hard trying to make up the deficit but was somewhat hampered by a mechanical issue on the bike. Boustouler was never headed and took victory from Scott with her younger sister Eva Scott finishing third.

The older two categories raced over a longer 1500m first run. In the over 12 category Sam Maher set the pace but Ollie Turner demonstrated his fantastic run form to keep the deficit to 8 seconds with Joe Hugh only slightly further back. Meanwhile Peter Holmes and Will Atkinson were head to head entering the first transition together at the front of the 12 & under race with leading girl Adele Maher close behind. Both Holmes and Turner turned up the heat on the bike courses of 4.5km and 6km respectively coming in at the end of the cycle with enough breathing space for an uncontested final 800m run. In the 12 & under race Adele Maher managed to move ahead of Will Atkinson and hold off his strong run to come home as first girl ahead of Aimee Hugh and second overall. Sam Maher switched off for the final run to save his legs for a cross country race the following day, Joe Hugh kept the hammer down on his run but the few seconds made up on Maher this time were not going to be enough to make up for his cycle deficit.

Race organisers thanked club and event sponsor Jacksons who had kindly sponsored the new club tracksuits being sported by most of the athletes. Parents and volunteers were also thanked for their help in managing the new, more complicated, run routes which were generally well received.
The second event in the series takes place on Sunday 15th December with an 8:30am sign on for a 9:00am race start for the 7 year olds and 9:15am start for 8s and over. Jacksons race events are free to enter and open to all children from 7 upwards.

For more details on the club, training and events see www.juniorjerseytri.com 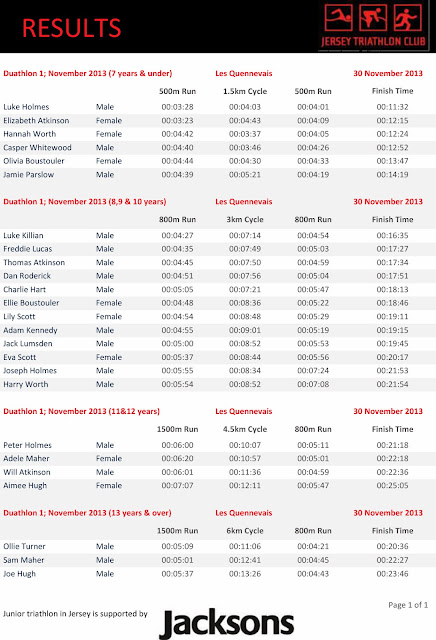