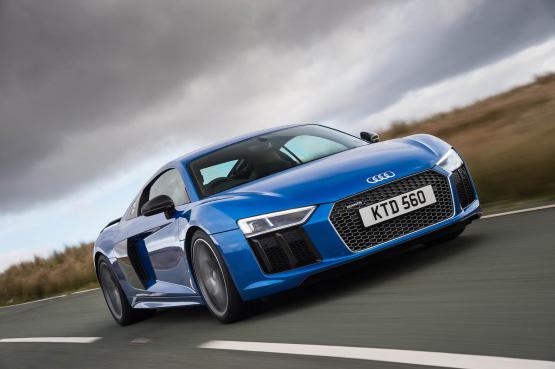 The new car might look remarkably similar though beefier and more muscular, but it's lighter, more powerful, has better economy and is even faster...

Gone is the V8 and in its place are two V10s...one knocking out 532bhp, and the Plus version with a mighty 602bhp on tap. That's close to a 50% increase over the original 4.2litre V8 eight years ago, not that I ever recall that car being accused of being the underpowered.

The new dual clutch seven-speed S Tronic auto box has lightning changes and mates perfectly with the 5.2litre powerhouse delivering eye-watering acceleration - 0 to 62mph in 3.2secs for the Plus and 3.5secs for the basic - alongside top speeds of 205mph or 198mph.

But it's not just about raw power. The new lighter space frame construction which has been pared down by 50kg is 40% stiffer and directly linked to sports suspension enhancing ride, handling and ultimate adhesion. Like the previous model, the new R8s benefit from Quattro four wheel drive.

Without a suicide-wish it's impossible to explore the outer reaches of the R8 Plus's cornering ability on public roads, suffice to say that it follows the driver's path faithfully with little sign of either understeer or oversteer has the speeds rise. Despite roll-free, phenomenally quick speeds around bends the ride via magnetic dampers is comfortable though obviously firm.

Dynamic Drive allows the driver to switch between comfort, auto and dynamic modes. The Plus adds to its repertoire by also offering a choice of wet, dry and snow settings which tailor the engine mapping, ratios and suspension to the conditions.

The steering, though high-ratioed and direct, lacks some of the feel and emotion of super-sensitive Ferrari or Porsche systems.

The pureness of sound and the instant response of the V10, unencumbered by turbochargers, has to be experienced to be believed. The needle flies around the tachometer to 8,250rpm accompanied by a glorious cacophony of almost orchestral proportions.

The cabin with its digital dash and 12.3-inch display and pin-sharp graphics, Nappa leather and multi-functional steering wheel is a great place to be. But I wish the wheel was round rather than flat-bottomed and I would avoid the optional bucket seats which, by their very nature, are not adjustable for backrest rake.

Audi prides itself on new tech and demonstrates an almost schoolboy one-upmanship in beating the opposition at the game. Its latest coup is the introduction on the R8 of laser lights to supplement the excellent LED system which instantly turns night into dazzling daylight.