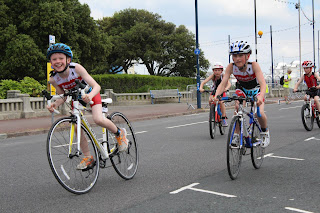 A team of 17 Jacksons Jersey Tristars made the trip over to Portsmouth to take part in the British Triathlon South Central Series event at the weekend.  After swimming running and cycling their way to the finish line there were a large number of podium finishes for the Jersey youngsters.

First to race in a field of 53 triathletes were the oldest Tristars 3 age group with a large Jersey contingent made up of Jack Kennedy, Peter Holmes, Will Atkinson, Archie Swain, Harvey Butler, Lily McGarry and Adele Maher.  Six of the Jersey seven were in the group of leading athletes as they exited the water after a cold 300m sea swim. After the 6.8km cycle and 2.4km run Peter Holmes, with a particularly strong bike leg, had pushed himself up through the leaders to finish in second place with Jack Kennedy, returning from injury, just missing the podium in fourth.  In the girls’ race Lily McGarry, after a typically strong swim, lost places on the bike but finished with a strong run to take fourth girl . Adele Maher finished a very creditable seventh girl. 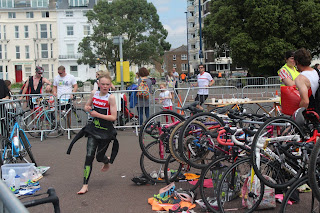 Competing against 59 other triathletes, a small squad of Tristars 2 was made up of Daniel Roderick, Jonty Butler, Thomas Atkinson and Lily Scott.  Atkinson was the leading Jersey competitor finishing the 200m swim, 4.8km cycle and 1.8km run in a time of 23:07 to take third in the boys category.  Scott and Roderick had their own private battle as they fought out a sprint finish to the line with Roderick finishing inside the top ten in eighth and Scott finishing fifth in the girls category.

Jersey’s Tristars 1 team was packed with quality and several of Jersey’s competitors were thought to have a strong chance of victory in a field of 35.The boys’ team was made up of Luke Holmes, Freddie Lucas, Charlie Hart, Adam Kennedy and Casper Whitewood while Elizabeth Atkinson was the sole girl in the team. As expected the Jersey athletes packed out the leading positions and as they came off of the bike it was a Jersey 1-2-3 as Lucas led Hart from Holmes.  Atkinson was not far behind in close competition with the leading girl.  After a fraught transition it was Holmes who emerged ahead of his team-mates whilst two other competitors had sped through transition to lead the Jersey group.  Holmes battled on through the run to regain the lead by the finish line whilst Lucas fought hard to take the final podium place. The quality of this particular team shone through with the boys, taking five of the top seven positions and Atkinson didn’t disappoint either taking second taking, just eight seconds behind the winner in the girls category.

The Jersey athletes were congratulated by the travelling coaches as well as other teams who were clearly impressed by the visitors’ performances.  The children, coaches and parents would like to thank Fintan Kennedy for organising what is the largest group trip to date for the growing Jersey Tristars.  Details of all Tristars training and racing can be found on the website at www.juniorjerseytri.com. 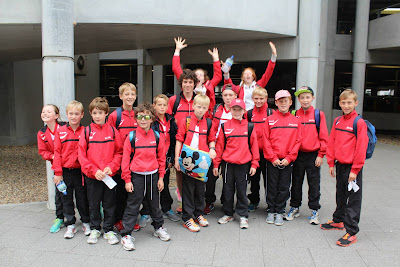