JACKSONS has appointed several new members of staff to strengthen the team as 2014 makes a brighter start than the previous year. 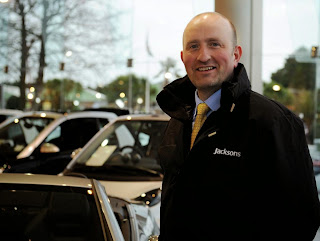 Peter Clifford has rejoined as a sales executive specialising in Mercedes. Peter worked for Jacksons in Poole, Dorset, selling Mercedes from 2003 to 2008 before moving to the Island to work at Motor Mall. ‘It is great to be back representing Mercedes,’ he said. ‘The range is strong and there are some exciting new products already in the showroom, with further launches during 2014.’ The new GLA compact SUV and A-Class are already available at St Peter, while the all new C-Class follows in June and there is also a new S-Class on the way. Smart also comes under the Mercedes banner and a new Four-Two is due in the autumn. ‘It is good to be selling new Mercedes cars again, but we also have a massive range of quality previously-owned vehicles starting from as little as £6,000,’ said Peter.
Posted by Jacksons at 11:20