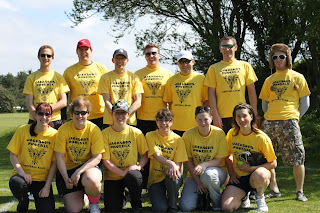 Jacksons Phoenix lined up for the second of their inter-divisional matches against division 1 side Cubs.

Cubs began to build a small lead from the second innings, but Phoenix were always tantalisingly close, finally pushing past the Cubs scoreline in the 5th, and capitalising by shutting the Cubs down without score in the bottom of the 5th. Going into the 7th, Jacksons Phoenix had a lead of 3 runs, and could smell victory, if only they could finish strongly. First batter up, and a strike out set the Phoenix nerves on edge. Second out followed, and no runners home. With bases loaded, the third out came as a crushing blow, and it was now down to the Phoenix ability to defend to secure the win.

Phoenix were frazzled but determined, and outs at 1 and then a play at second saw only one more out needed to clinch the win. But then disaster seemed to hit and a short stretch of bases awarded on balls saw one of the Cubs batters home and all bases loaded. One lapse of concentration and all could be lost. A pop up into the infield, and pitcher Cameron Ramsay took the catch that mattered. Ball game and the Jacksons Phoenix took the win.