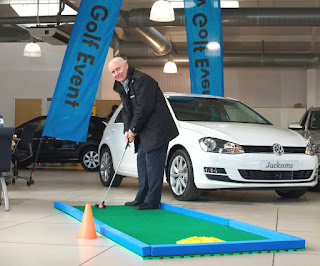 JACKSONS are laying on family days with a golf theme this weekend to launch the seventh generation of the Volkswagen that bears the same name.

Mums and dads will have a number of vehicles on display and available for test drives of the latest incarnation of the hugely popular model, while the children can entertain themselves by playing a crazy golf game inside the showroom or by playing golf on the Nintendo Wii on a big screen. There will also be refreshments available.
Scores in the crazy golf and on the Wii will be recorded, with the best ones winning a new iPad and the Nintendo Wii console respectively.
Jacksons sales development manager Neville Davidson said: ‘The Volkswagen Golf in an important car for us. It’s a very popular family car and we wanted to ensure that the whole family could get involved and enjoy the launch of the seventh-generation model.

‘We have a number of examples of the different variations in the range to view and some that will be available to test drive on a first-come, first-served basis, but we will also be able to book in test drives for the coming weeks. We also have a selection of Mark VI Golfs available.’
The new Volkswagen Golf claimed its first award a month before it went on sale in the UK – the inaugural and prestigious accolade of ‘All the car you’ll ever need car of the year’ in the TopGear Magazine Awards 2012.

Every TopGear Magazine Award is judged by a group of expert and extremely opinionated motoring journalists, including the presenters of TopGear on television. Summing up the judges’ views on the new Golf, TopGear’s consultant editor, Paul Horrell, said: ‘Stopped or on the move, it feels like it’s made of stronger materials than the hatches of other nations. A Golf is no more car than you need, yet it can be all the car you want.

‘Sometimes, it can be hard to find a question for which Golf isn’t the answer.  It’s the right size for the city and nimble in the country. Yet at normal motorway speed, it is more relaxed than many big-tyred luxury barges.’

In recognising the Golf’s achievement, editor in chief Charlie Turner added: ‘For a car to win is recognition of an exceptional vehicle. Only the remarkable are even considered for a TopGear Award, and this year the Golf has proved to be the stand-out machine in its category.’

The seventh-generation Golf was unveiled on 4 September 2012, 38 years and 29 million units after the original model redefined the small family car. Based on the new MQB platform, the new Golf is bigger, lighter and safer than ever, bringing technically advanced features previously reserved for higher classes to a new audience.