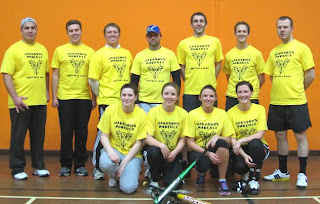 It was only the second outing for the Jacksons Phoenix team, but already the team seemed noticeably more at ease with the game.

Taking to the field against the Infrasoft Tigers, the rookie players quickly settled in to the innings, and established good fielding link ups that kept the Tigers from building points.

At bat, the players continued their week one form, and swung though the pitches, progressing round the bases with much greater awareness of where the ball was on the field than they had displayed in week one. A change of pitcher for the Tigers in the bottom of the third innings provided Phoenix with the opportunity to watch the pitch coming in, but it was not long before the Tigers were back in the swing of things and Phoenix were tested once again, rising to the challenge with a series of home runs from Tasha Whipp, Eduardo de Gouveia, Kirsty Hawksworth and Alex Kilpatrick. On the field, Jason Boschat on 3rd, Gary Coleman in left field and Cameron Ramsay (playing his first game) all took some important catches. With all players showing noticeable improvement the final victory was well deserved with Phoenix taking the game 110 to Tigers' 43.
Posted by Jacksons at 15:43