Jacksons Phoenix took to the field with enthusiasm in tonight's game against Tigers. Both sides struggling to fill their numbers, Phoenix worked hard to try and adjust to the change in fielding positions, with Flyers Michelle Thomson quickly settling in to the Phoenix line-up. The Jacksons side made a solid start, with the Phoenix gloves showing the improvement of the 3 games the rookie team now have under their belt, and Phoenix prevented the Tigers from stretching a lead. At bat, the teams desire to win worked against them at first, with nervy Phoenix taking a couple of innings to hit their groove. Once they did however, the Phoenix team quickly reeled in the Tigers and the game began to look like it could go either way. 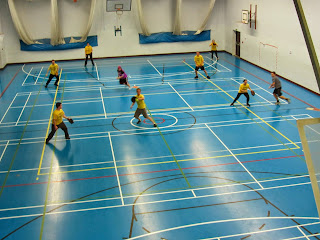 Stellar turns from the Phoenix men provided some memorable moments on the field, with each of Jason Boschat, Jake O'Toole, Mike Quinn and Cameron Ramsay stepping up their game, Boschat and Ramsay also taking a home run each, and Fionnuala Cope continuing her hot streak on the bat for the ladies. Man of the match goes to Alex Kilpatrick however, who was grease lightening for the full hour, taking a number of improbable catches off the bat, and scoring a home run on bases in one of his aggressive base runs. A shaky innings in the final throes saw Tigers seize control, and despite an excellent performance overall by Jacksons Phoenix, Tigers took the victory 70 - 44, though with their closest game to date the Phoenix side continue to edge closer to the first elusive win.
Posted by Jacksons at 15:06