JACKSONS service adviser Ian Houillebecq swapped the day job of looking after the owners of Mercedes and Smart cars for building the block walls of a new church in Burkina Faso recently. Ian was one of  ten  members of the Freedom Church who travelled to Bobo in the rural West African country. 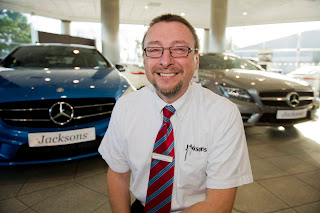 ‘The practical side of the trip was to build a church,’ he explained. ‘The aim was to get the walls up to a certain stage and then have a local builder complete the project, and we achieved our aim.
‘We also carried out some repairs to a playground on the same site, but the trip was also about meeting the children we sponsor, and we took lots of medical supplies, football kits and footballs.

The Freedom Church sponsors 150 children in the village through the charity Compassion.’
The connection between the Freedom Church and Bobo goes back 12 years. It started through the respective pastors, Andrew de Gruchy and Samuel Yaldia, who met at Bible college in Belfast and have remained friends ever since.

Samuel  is responsible for  a number of churches, including the one which has outgrown its building. There have been three previous visits by groups from Freedom.
Ian explained that his 12 years in the painting and decorating trade and keen interest in DIY had prepared him for the building work in Bobo – that and some block-laying training before the party set out.

‘The big problem was the heat,’ he said. ‘It was physically demanding, and we also had to learn a different method of block-laying, which a local builder showed us.
‘We achieved everything we needed to, but less than we wanted, but it did give us time to mix with the local people and get to know them, which was fantastic. We were treated like royalty, and it was one of the most humbling experiences of my life.

‘We hoped to bless the Bobo community by building a new church for them, but we ourselves were blessed by their reaction and welcome and their thanks. The children and their families have nothing but they still gave us gifts – one of which was a live chicken. We just had to smile and say thank you and then worry about what to do with it!

‘On the Sunday we attended a church  meeting that lasted more than four hours. It sounds a long time, but it was just fantastic. People were dancing in the aisles.’
Members of the Jersey group visited the families of the children they support. He sponsors Yasmine and Roger. ‘One of the children whose home we visited lived with their grandparents, neither of whom worked. They had no running water or electricity and the house was derelict and looked as though it was about to fall down.

‘It gets pitch black as soon as the sun goes down at  6  o’clock. We took them a couple of sacks of rice, which cost £15, and their reaction was amazing. They rely on charity for food. The staple diet is rice, and if they can’t afford it they make food from maize. A lot of the children don’t go to school because they can’t afford it – yet it only costs £35 for a full year, which is nothing to us.

‘The pastor at Bobo has big plans when the church is finished. He has already built a school but he has a vision for primary, secondary and university-level education under the church, as well as a community and health centre. We could have plenty of work out there for years to come, and I’m really looking forward to it.’

Ian said he was grateful to Jacksons for supporting his trip, and he hopes to return to Bobo next year.