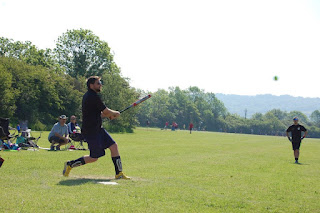 This Sunday saw Jacksons Falcons seize the division 2 crown for the first time in their history as the Falcons team.
A tough fought season which started off with the Falcons taking 5 out of 7 wins in an off Island tournament at the Bristol DD tournament, another first for an independent JSA team, culminated in the Falcons taking a string of victories that put them in the running for the battle for promotion, quite an unanticipated position for the team which has mostly been focused on the development of new players for the past few seasons.
Fresh off of their Bristol success, the Jackson Falcons found it difficult to regain their swing, and a number of inter-divisional matches saw them struggle to find their groove. The new season regulations created a new scenario which played to the strength the rough hewn diamonds, seeing an extra point at stake for any division 2 side which could keep within 10 runs of their seasoned opposition, a feat which the falcons achieved twice in 4 games against the upper echelons of the Softball Association.
Division 1 competition out of the way, the Jacksons Falcons bedded down, and as Summer 2012 found it's feet, and the Sun remembered how to shine, the Falcons soared to win after win. Clawing their way up from the bottom of the league, the Jacksons Falcons found themselves in a 3-way battle for the title, and having seen of Los Naufragos who by the end of the season had secured second place, headed into a tense head-to-head against Infrasoft Tigers, the winner of which would be crowned champions, whilst the loser would settle for third in the league.
Tigers winning the toss, they opted to bat second, putting the Jacksons Falcons at the disadvantage of first bat. Not to be distracted from the task at hand, the Falcons opened the innings with a strong outing. A home run from Ric Pedro and they were off, 4 runs on the board before the Tigers could close them down and something for the team to defend on the field. End of the first coming 4 - 2 in the favour of Jacksons Falcons, the Falcons began to overcome their nerves and switch up a gear, stretching their lead at will at bat, and keeping the Tigers to a low run count on the field, shutting them down at 0 runs three times during the course of the match.
Scoring in every innings and always remaining safely in excess of double their oppositions scoreline, the Falcons brought the wealth of their full seasons experience, coupled with the extra training acquired as a voluntarily non-scoring 'development' team in the corporate league, and pulled ahead with every turn at the plate.
The match was not without injury, and four of the Falcons came off the worse for collisions in the field, with another Tigers player also suffering an injury at home plate. This did not hamper their enthusiasm for the chase, and special mention goes to Rochelle Gardiner, who raced to secure two catches in the outfield, Sam Lempriere, who carried on pitching with an injury to his wrist and chalked up 2 home runs in the match, and Theresea Lambrick, who put in another solid performance at first base.
The end of the match saw the Falcons secure the title comfortably, a final score of 25 - 8 and with more wins than any other division 2 side.